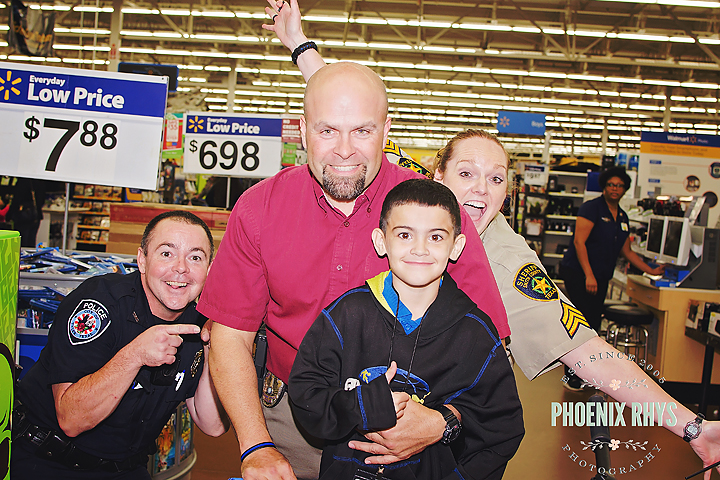 Most of my clients know that along with owning and running my photography business, I am also a police officer in East Texas.  And if you know any officers or any other public servants, you know that this is not something that we just do, it’s who we are.  (Because we dang sure aren’t doing it to get rich)

Rarely do my skills in both of my jobs get to come together in any kind of good way but this year I had the absolute privilege of photographing (along with Ryan Jordan from Ryan Jordan Photography) this years Blue Santa Event.

Blue Santa was sponsored by the East Texas Fraternal Order of Police in Tyler lead by Tyler PD Officer Chuck Boyce. With donations and assistance from officers and various businesses in the area, it gives underprivileged children, children that have been victims of crimes or that have lost parents because of crime, the opportunity to go Christmas shopping at Wal-Mart with a police officer.  Children were allowed to spend around $100 and on several occasions this night, I saw officers pulling out their own cards and cash to pay for the children to have extra.  Or in the case of one young man, the officer purchasing him a helmet to go with his new bicycle!

Blue Santa was there taking pictures with the kids and asking them what they wanted for Christmas when they first showed up, then they received a Christmas stocking full of goodies made from old uniforms by Michelle Askew.

Animal Control officers were also on hand to wrangle the stuffed animals that they were handing out to all the children.

There were so many officers (around 80+) who volunteered that Officer Kerry Long called the fire department across the street so I could stand on top of the fire truck to take the group photograph of them! I’ve never been so proud in my life to call these people family.

One officer joked that he didn’t volunteer he showed up for a call and saw all the kids and wanted to shop with them, the call could wait.

The children were awesome!  I got big smiles out of everyone and was even informed by SCSO Sergeant Schultz and  LISD PD Officer Wilson that I was to address their child as princess and princess only.  My bad!! 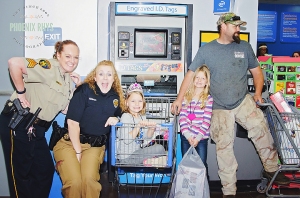 For a little while, I thought we were going to have to arrest some officers for kidnapping because I didn’t think they were going to give the kids back to their parents!

For anyone who has never spent much time with an officer, most of us are just kids ourselves at heart.  We were those kids that wore capes and were going to save everyone and the world.

And you know what, maybe we aren’t still running around with bed sheets tied around our necks (well maybe some of them are, we won’t talk about what they do at home) but on days like this maybe, just maybe we kept a child from going without for Christmas or MAYBE  we even touched a kid’s heart enough that it breeds a whole new generation of cape wearing heroes.

Do me a favor, readers of mine (all 4 of you), please share this. There is so much bad news out there that these stories of love and happiness need to be shared, recognized, and appreciated this holiday season. And if you would like to donate for next year OR sponsor a child please check it out HERE.